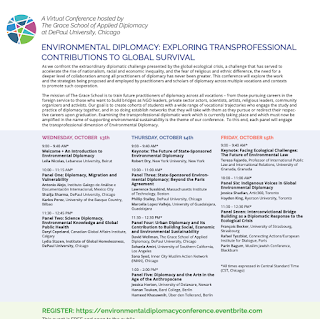 Posted by Leila Nicolas at 11:01 PM No comments:

Good morning! It is afternoon here in Lebanon.

I will use our Lebanese greeting word, which can be used at any time during the day and night; Marhaba.

Thank you for inviting me to this important conference. It is an honor to be a speaker in this session and participate in the following sessions.

When I was about to write my book "effective forms of environmental diplomacy," I was mainly concerned about the idea that the root causes of future conflicts in the world will be mainly environmental.

As a researcher and an activist in the Middle East, that idea gets me along with all the geopolitical conflicts in the region. I thought we would need better conflict resolution strategies, more focused and effective environmental diplomacy to preserve peace and security on the global, regional, and national levels.

Trying to map the issue of environmental diplomacy, I will address three main questions:

On the state level, diplomacy in its early traditional sense focused only on 'high politics,' i.e., national security, defense, and sovereignty. It did not weigh what was considered 'low politics,' i.e., social, cultural, and environmental issues considered peripheral.

Despite starting to negotiate environmental treaties in the mid-nineteenth century, it was not until states began to view the environment as a threat to security that they began to give weight to environmental diplomacy.

What causes an environmental conflict?

Instability can be caused by a decrease in supply and demand, besides the people's inability to access key resources.

In the presence of poor economic performance and lack of adequate infrastructure, population growth may cause conflict and instability.

In addition to the political, economic, and social problems, some authors argue that the root cause of the Arab spring was the youth bulb.

Once people migrate due to a lack of resources and inability to survive, conflicts will arise. Then, group-identity issues could lead to violence within migrant and host societies, and possible conflicts may arise over host resources.

We can refer to the tensions in Lebanon between the Syrian refugees and the host communities, especially in Akkar and Bekaa, where resources are scarce and where people in local communities are under poverty lines like their new guests.

This narrative also relates to the concept of food security, where globalization has allowed for mass production and distribution, often at the expense of the environment.

When communities experience livelihood insecurity due to environmental degradation, the disadvantaged members of society will suffer the most, and as a result, violence will likely emerge.

This is the case in most third-world countries.

Drawing one of the strongest links between environment and conflict, we can refer to the Syrian civil war:

- An extreme drought in Syria between 2006 and 2009 (which was most likely due to climate change) was one factor in the violent uprising in 2011.

- Iraqi migration and influx of refugees to Syria, in addition, environmental migration from rural areas to the cities, which led to high unemployment rates, pressure on infrastructure, and resources scarcity, are other factors.

- Population growth, unequal resource distribution, lack of opportunities, and inability to access resources due to corruption, clientelism, and dictatorship, were also leading factors.

Therefore, Environmental Diplomacy should be seen as a Peacebuilding Tool.

Where are we now?

Since the end of the Cold War, diplomacy has witnessed a huge transformation. The role of technology and media changed the image of a diplomat. It reinforced "public diplomacy," in addition to the emersion of new non-state actors such as non-governmental organizations (NGOs) and even multinational corporations.

On the bright side

1- Progress in IEL and its principles

3.    The Principle of Cooperation

4.    The Principle of Sustainable Development

7.    The principle of Common but Differentiated Responsibility

The NGOs' widespread influence highlights the importance of their advocacy plans and their role in adopting and implementing environmental projects.

Engaging in 'multilateral diplomacy' helped facilitate cooperation and coordination between different stakeholders at international and national levels and between civil society, public and private sectors.

The environment has become part of every level of decision-making processes, which results from the modern understanding that cities and communities and economic, social, and political life are all subsets of the environment. All people belong to the ecosystem in which they thrive.

States' policies within environmental governance tend to emphasize several aspects of environmental policy. The most notable policy priorities are the effect of the environment on the quality of life, climate change, ecosystem degradation, nature and biodiversity, natural resources, and waste management.

Even though progress has been made in environmental preservation, the problem lies in the states' national interests, which affect their compliance with environmental laws and principles.

The economy and environment are interconnected. Environmental diplomacy will not succeed without considering economic interests. Besides, economic diplomacy will not be sustainable unless it addresses environmental issues. However, this relationship caused asymmetrical perceptions and differences in interests and conceptualization between the Global South and the Global North.

While most of the sustainability discourses in industrialized countries refer to environmental issues, developing countries are still involved with economic and social problems such as poverty, social injustice, and lack of development.

The rise of populism (esp. right-wing populism) in the world was accompanied by the spread of "conspiracy theories" and the rise of "climate change denial" theories.

This coincided with lobbying against "green policies." From 1989 onwards, industry-funded organizations sought to spread doubt among the public about global warming in a strategy already developed by the tobacco industry.

As a result, the public discourse shifted from the "science and data of climate change" to a discussion of politics and the surrounding controversy. The scientific skepticism developed to denial, then to a hoax or conspiracy theory.

Usually, internal conflicts over economic versus environmental policies cause a disturbance in the state's negotiating power and weaken it, giving opposing parties an advantage, sometimes for the benefit of anti-environment agendas.

Informal diplomacy has altered the way of conducting international negotiations, especially on the environment. Despite not having an official status, coalitions between states and /or NGOs facilitated coordination, advocacy and led to successful environmental negotiations. Coalition-building is a form of 'associative diplomacy" that increases the group members' bargaining strength when voting and increasing lobbying power.

This coalition-building has proved to advance the environmental treaties and agenda; however, an environmental coalition may only be as strong as its weakest link. Each member will have different levels of resources and experience, so states or organizations that provide a lot of resources and powerful leadership can lead the coalition to serve their own interest.

NGOs are independent of government institutions, but they usually rely on funds to carry on their missions.

Some NGOs receive millions of dollars funds from states. This may raise some questions about their level of independence and legitimacy. As Transparency International points out, "NGO status risks to become a mere vehicle used by special interest groups to avoid control mechanisms." Others have raised the problem of the Astroturf, which is the "process by which firms create mobilizations that take the form of an NGO, resemble an NGO but whose existence is, in fact, provided by private funds, for commercial purposes."

How to move forward?

Today, in a complex interdependent world, diplomacy is facing many challenges that require better practices. It must realize this urgency "to develop or perish."

The earlier developments changed its character and the number of players competing with traditional diplomats. Today, it is essential to move towards more professionalism, to have "expert diplomats."

Expert diplomats are "professionals with advanced scientific training and are authorized to make politically or legally binding decisions."

Building a team of expert diplomats and negotiators from various backgrounds helps facilitate conflict resolution strategies by thinking out of the box and adding extensive new knowledge and skills to the already known ones.

What is needed is a consistent interdisciplinary training program for diplomats that provides them with extensive knowledge and position at the same time to reinforce their expertise in scientific fields.

Here, I suggest the training should go both ways:

The notion of scientific expertise should not omit the political nature of international negotiations.

In other words, governments should train their expert diplomats to act upon their scientific knowledge and their political and diplomatic understanding.

What is needed is not just using technical and scientific experts to work beside the political negotiators but also to empower environmental expert diplomats and train them to actively engage in all phases of the negotiations.

The urgency of protecting the environment pushes us to establish an "environmental diplomat" as a 'career.'

This career should be linked to social and political construction in which the diplomatic factor is not replaced, but it complements the work of other diplomatic agents.

An environmental diplomat should speak with an expert and a political voice at once.

They should approach any environmental issue with a globalist perception.

On a final general note, I urge scholars and practitioners in the field of diplomacy, international relations, and political sciences to move beyond the traditional perceptions and understanding of their fields.

More than ever, the environment is becoming an essential question in various fields:

- At the global level, nature is becoming the source of both cooperation and conflict, which imposes a new vision for the future of diplomacy.

- States are more aware of the new challenges caused by environmental degradation on national, regional, and global levels.

- Environment is becoming the main issue for voters' choices in elections. Politicians are more to offer "green" policies and promises in their programs.

- Environment has become one of the main sources of economic power nationally and globally. States are looking for more investments in a green economy and foresee solutions for their unemployment problems.

- International relations are moving away from traditional concepts of security and conflicts and forecasting that the main root causes of future conflicts will be environmental.

Posted by Leila Nicolas at 11:06 AM No comments: